What is the Super Taikyu Series?

The Super Taikyu Series is touring car endurance racing for commercially available vehicles, in which everyone is entitled to participate. It was launched in 1991 in Japan and marked its 25th anniversary in 2016, having been at the top of the participatory motorsports in Asia. In Japan, it is commonly known as “S-Tai” and has been loved by people for many years, and the growing number of drivers from neighboring Asian countries take part in it of late years. As endurance racing series developed in Japan, we plan to hold “24 hours of the Super Taikyu Series” in the near future at the Fuji International Speedway located at the foot of Mt. Fuji which has been registered as one of the World Heritage Sites.

Where is the Super Taikyu Series held?

Each year, the Super Taikyu Series is composed of 6 rounds at the major FIA Certified circuits in Japan.

How many drivers and vehicles participate?

More than 60 vehicles make annual entries every year. A large number of gentleman drivers (amateur drivers), who have abundant racing experience and enjoy races on a daily basis, participate in the Super Taikyu Series, and besides, more and more professional drivers renowned both in Japan and abroad and former exceptional drivers join in the series. This indicates that it has gained popularity as a team sport where both professional and amateur drivers play their heart out in long endurance races. 2 or 3 drivers each car for 3-4 hours races and minimum two pit stops are required. Up to 4 drivers for 10 hours race.

What kinds of vehicles participate?

Commercially available vehicles that everyone can buy are modified into racing cars within a minimum range and divided into classes by engine displacement and drive system. A class for vehicles in compliance with the FIA GT3 was newly established in 2011 and classes for vehicles in conformance with the GT4 and the TCR respectively were newly set up in 2017. Partnership was forged with World Sporting Consulting Ltd., the promoter of the TCR International Series, and the “TCR” class of the Super Taikyu Series is called the “TCR Endurance SuperTaikyu Class” worldwide. 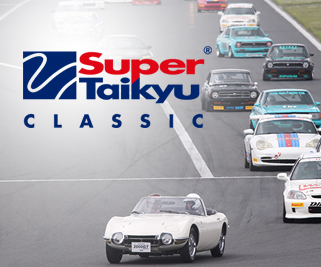